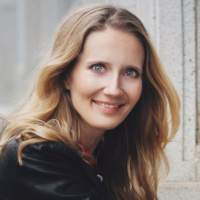 Rebecca (she/her) worked for more than a decade in PR and communications and had brief forays as a speed dating hostess, spokesmodel, yoga instructor, and world traveler. Her love of film evolved since being a film publicist with the Denver Film Festival. In 2013, she completed her M.A. at the California Institute of Integral Studies in the Philosophy, Cosmology, and Consciousness program. Her thesis, titled “Stargazing: Re-enchantment Through Language,” combines philology, consciousness studies, and enchantment with the stars. (Warning: She will talk your ear off if you ask about it.)

While she considers herself an intersectional feminist, also acknowledges her whiteness, cisgender, and able-bodied privilege as a constant process of uncovering. Her identity as a witch speaks to a strong political stance against the macro expression of patriarchy and its value of dominance over collaboration.

When not writing she can be found "force" cuddling her cat, getting lost in the redwoods, or curled up with a good book.

[Photo: In Her Image]